Here are some suggested routes to explore Holyrood Park on your own, suitable for a range of abilities. Whether you lose yourself for half a day, or drive round in 15 minutes, you’ll get fantastic views and a sense of escape from the city streets. The Park can be visited throughout the year, and although there are steep slopes and slippery rock, it’s pretty safe as long as you use common sense and don’t go beyond your limits.

Here are five suggested routes in the park, suitable for a range of abilities. Check them out on my map below. The colour scheme is just for this map. You won’t find any signposts or markers in the Park, but there are usually people to ask if you feel lost.

Follow these routes at your own risk, and take care especially in poor visibility or high winds. But most of all enjoy Edinburgh’s top attraction! To find out more about the park, I recommend Discovering Edinburgh’s Volcano, a leaflet published by the Edinburgh Geological Society. 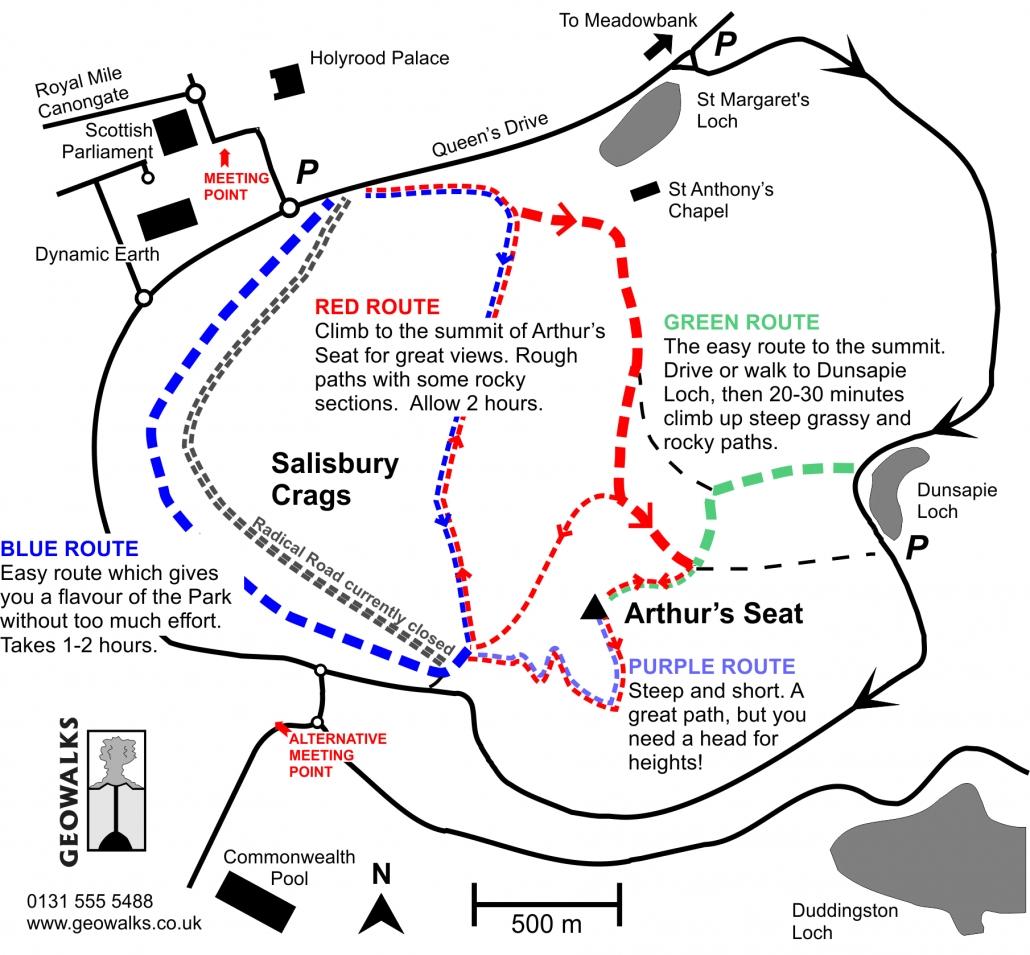 1: Red Route  The best walk, reasonably strenuous but the more gentle approach to the summit. A circular walk from Holyrood Palace, takes about two hours. Find out more …

2: Blue Route The easy walk! Escape the city streets and wander through Hunter’s Bog, below the craggy slopes of Arthur’s Seat. Once you’ve climbed to the high point for good views of the city, continue around Salisbury Crags back to the start point. Find out more …

3: Green Route  The shortest route up Arthur’s Seat, but it’s a bit of a slog up a steep grassy and rocky paths from Dunsapie Loch on the east side of the park. It’s shorter than the Red route, but feels longer! Find out more …

4: Purple Route  Climbs the steep side of Arthur’s Seat, this is a superb steep climb along a beautiful stone-pitched route. Feels like you’re flying up! Find out more …

5: The Queen’s Drive  Walk, cycle, run or drive it, if you don’t want to leave the tarmac this curvy road takes you all the way round the Park. Good views, not too steep and a good workout if you walk right round. Find out more …

Getting to the Park

There are several entrances to Holyrood Park, but the most common approaches on foot are
– the Royal Mile (entering the park next to Holyrood Palace), for the Red and Blue Routes
– from the Commonwealth Pool / Pollock Halls – the Holyrood Park Road entrance, for the Purple Route.

Guided tours for small groups are available all year with geologist Angus Miller. Climbing to the top of Arthur’s Seat and back takes about two hours, or you can choose a low-level, easier option. Get in touch to find out more, or visit the Guided Tours on Arthur’s Seat page. 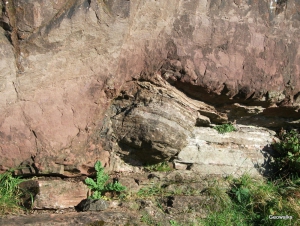 Don’t miss this most famous of rock faces, tucked away just off the Radical Road at the south end of Salisbury Crags.

The rocks are impressive. The hard dolerite of Salisbury Crags lies above softer sandstones; the junction between them is irregular, demonstrating how the dolerite is formed from intrusive magma that ripped up the existing sandstone layers as it squeezed between them.

The rocks are famous for their link with James Hutton, 1726-1797, the ‘father of modern geology’. Hutton used these rocks to support his theory of an ancient earth, arguing that the sandstone and dolerite formed by different processes, and not at the same time.

THE RED ROUTE – follow an ancient lava flow to the top, and back by Salisbury Crags

The route: From the Holyrood Palace car park, take the paved path which climbs gently away from the road. At the first corner, the main path continues round into Hunter’s Bog (the Blue Route), but take the left fork and head towards the ruin of St Anthony’s Chapel. The line of cliffs leading up towards the summit of Arthur’s Seat is called the Lang Rig (or Long Row) and is the remains of a basalt lava flow. The easiest route is past the boulder marking St Anthony’s Well, and then follow the path behind the Lang Rig. Or, if you prefer, you can take the path along the foot of the cliffs; they both meet higher up.

A steady climb takes you to a rocky knoll with views to the east. You can see Dunsapie Loch below you. The worst of the climbing is over, and another five minutes climb along a rocky path (there are two to choose from) takes you to the top.

Enjoy the views, if you can! There are a variety of routes down: you can return to the rocky knoll, and back down the path you came on, then take the first left fork and the path which gradually descends (with steep steps) round the west face of Arthur’s Seat. Eventually this path opens out into a grassy area at the end of Salisbury Crags. Alternatively you can descend to this same point from the summit by the Purple Route.

From the south end of Salisbury Crags, you can follow the Blue route below the Crags, or cut back through the middle of the Park to the starting point.

THE BLUE ROUTE – follow the hunters through the bog, and back by Salisbury Crags 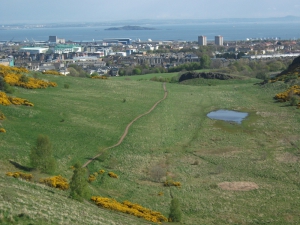 The route: From the Holyrood Palace car park, take the  paved path which climbs gently away from the road. At the first corner, where the Red Route heads off for the hill, keep to the main path round to the right.

Our route takes us through the broad valley of Hunter’s Bog. There are good paths on both sides, so you can cross to the left side of the valley, or stick to the right. The right-hand path is better, with a less steep climb.

Towards the end of the valley, the paths climb with the steep slopes of Arthur’s Seat to be admired on the left. You eventually climb to a grassy area at the end of Salisbury Crags, where the Red Route joins us from the left. The steep path leading up is the Purple Route. Continue straight on, with the suburbs of Edinburgh suddenly coming into view, then swing right on the grass below Salisbury Crags, with great views of the Castle rock and the centre of Edinburgh.

THE GREEN ROUTE – the short way to the top, and not as fun as the other routes

The route: Drive or walk along the Queen’s Drive to Dunsapie Loch. There are a couple of obvious paths that strike up the grassy slopes from the road, heading for the summit of Arthur’s Seat. The paths cross ancient agricultural terraces, carved out by early farmers taking advantage of the well-drained soils.

The paths converge close to the rocky knoll, my favourite viewpoint and rest spot. I once found a flint scraper lying on the gravel here, and I like to imagine its owner in the past also enjoyed the view. From here, the route is more interesting (there are two paths to choose from), and it is only another 5-10 minutes to the top.

The route: The adventurous way to the top. You start from the Holyrood Park Road entrance, just along from the Commonwealth Pool. Head across the grass to the end of Salisbury Crags, where an obvious path goes through a low point in the cliffs. The start of the track up to Arthur’s Seat is obvious once you cross the Crags. If you don’t like the look of it, there is an easier but longer path striking off to the left. If the weather is ok (not icy or windy), and you use common sense, you’ll probably enjoy the climb. It is a beautiful path, switch-backing steeply up and cutting over to the right to bring you onto the Nether Hill. Once you start up, the slope gets steeper but the exposure isn’t too bad. Stick to the path, and when you get to the end of the stone-pitched section, avoid the obvious route up to the left as this has a short tricky section of bare rock. From the grassy summit of Nether Hill, there are several paths leading to the summit of Arthur’s Seat.

The route: This is a paved road, with pavement or footpath alongside, which circles Arthur’s Seat and Salisbury Crags. The eastern side climbs high into the wild side of the Park, while on the west the road is busier and swoops round the base of Salisbury Crags. You can start at any point, but if you are driving note that most of the route is one-way in a clockwise direction, and parts are closed to traffic some days. From St Margaret’s Loch (the Meadowbank Entrance), the road climbs steadily to a high point at Dunsapie Loch – the Green Route to the top starts here. The road continues flat round the shoulder of Arthur’s Seat, and starts to descend once Salisbury Crags comes into view.