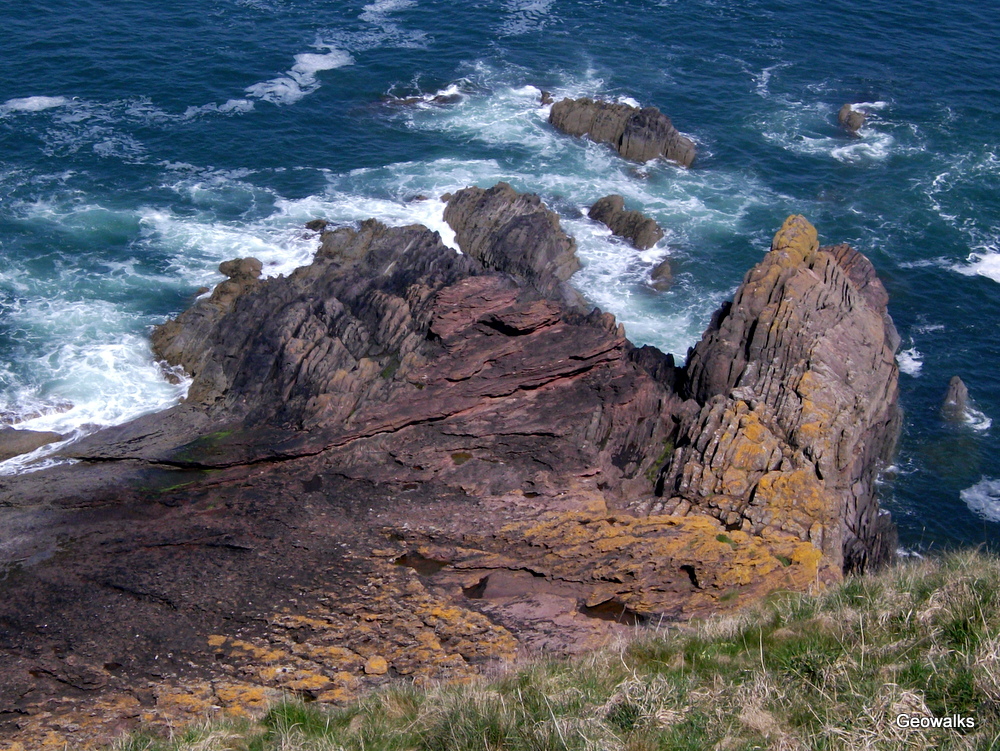 It is Scotland’s most important geological site, but Siccar Point is tucked away on the rugged coastline of the Scottish Borders, a hidden gem with beautiful coastal scenery and a rich geological story. We’ll get to the point by following James Hutton’s journey along the Berwickshire Coast from Cockburnspath, gradually travelling back in time through three periods of contrasting sedimentary rocks.

THE ROCKS: Siccar Point is world-famous because it was discovered and described by James Hutton in support of his world-changing ideas on the origin and age of the Earth. It remains now much the same as when Hutton visited in 1788. The junction between the older, tilted layers of greywacke sandstone and the younger Old Red Sandstone is clearly visible, allowing us to work out the story of the formation of these rocks, and by approaching along the coast as Hutton did, we can see Siccar Point in the context of the surrounding area.

THE WALK: A varied walk along the coastal path from Cockburnspath to Siccar Point, which lies at the foot of a steep grassy slope; it is not essential to descend all the way down the slope to see the key features. Distance 6km one-way. The walk will finish at Siccar Point; it will probably be possible to arrange lifts back to the start, or you can walk back on quiet roads, an additional 4km.

I have classified this as an Easy Walk, but with an adventurous addition of descending to the Point, which is only possible if the weather conditions are right. It may be wet, windy or cold. Come equipped with strong footwear, waterproof clothing and something to eat and drink.

This walk is accessible by public transport, bus from Edinburgh Bus Station at 9am; walk starts at Cockburnspath at 10:30am. Return bus from Cockburnspath in the afternoon.  There are various options to return to the start point after the walk: there is a shorter return route (4km) along the minor road from Pease Bay to Cove. Get in touch if you’d like to arrange a car shuttle.

An event for the Scottish Geology Festival.