You are here: Home / Resources 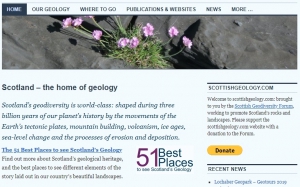 Scottishgeology.com is a gateway site to Scotland’s geology, and includes an introduction to the geology of Scotland, the 51 Best Places to see Scotland’s Geology, and links to further information.

BGS Geology of Britain Viewer: online, zoomable Bedrock and Superficial maps at 1:625000 and 1:50000 scale for the whole of the UK. Also available from the free iGeology app.

Britice Glacial Map: over 170,000 landforms in Britain and Ireland formed during the last glacial period (27,000 to 10,000 years ago). Increasing detail appears as you zoom in.

There are plenty of good books about the geology of Scotland, but I particularly recommend these: all up-to-date, well-illustrated and readable, without too much jargon! For field guides with detailed descriptions of different areas of Scotland, check the publications of the Edinburgh Geological Society and Geological Society of Glasgow.

The Hidden Landscape, Richard Fortey, 1993, updated 2010. A travelogue of the geology of Britain, a highly entertaining read, excellent for bringing out the big themes and linking them with the human story of Britain. I was delighted to see it republished in 2010, having been recommending this book for years. Many people have come back to me with variations on the theme of “the best (geology) book I’ve ever read”. This is a story, not a text book, beautifully written and really hammers home how the diversity and beauty of our country comes from the bedrock. Buy it! Pimlico, 978-1847920713

Geology and Landscapes of Scotland, Con Gillen, 2013. The best comprehensive account of the geology of Scotland. Con has done a good job in summarising a huge amount of knowledge into a concise volume covering the geology, mineral resources and landscape of Scotland. This book contains a lot of detail and is dry in places, but technical terms and rock names are simplified and explained, with an excellent glossary. Dunedin, ISBN 9781780460093.

Landscape fashioned by geology series, Scottish Natural Heritage/British Geological Survey. A series of short, well-illustrated books introducing the geology of several areas of Scotland. e.g. Scotland – the creation of its Natural Landscape, Scottish Natural Heritage, ISBN 1-85397-004-2. The entire series is now out of print, but available as free pdf downloads from the scottishgeology.com website.

Some of the Landscape fashioned by geology have been republished by Birlinn as the Landscapes in Stone series, authored by Alan McKirdy. The series includes the introductory Set in Stone, by Alan McKirdy 2015. A great little book, exploring the big stories of Scotland’s geology for a non-specialist audience. Birlinn, ISBN 9781780271514.

Edinburgh Rock: The Geology of Lothian, by Euan Clarkson and Brian Upton. Dunedin, ISBN 1903765394. Published in 2006, the book is written by two of the geologists who taught me at Edinburgh University. The enthusiasm I remember from their teaching bubbles from the pages. Euan Clarkson and Brian Upton have made a great team, bringing together their expertise in different areas to provide a comprehensive description. The book is written for non-specialists, but given the nature of the story and the amount of detail included, it is inevitable that there is a fair amount of geological terminology to be wrestled with. Read it with a geological dictionary to hand! By the same authors, Death of an Ocean: a geological borders ballad (2009) continues the theme and explores the fascinating and under appreciated story of the Southern Uplands. Dunedin, ISBN 9781906716028.

The Western Highlands of Scotland, Con Gillen, 2019. I spend a lot of time in the Western Highlands, and have over the years become entranced with its geological variety. There are some well-known, must-visit parts such as the Northwest Highlands UNESCO Global Geopark. But also very interesting geology in less-visited parts, such as the Argyll islands. This book gives a very clear coverage of the entire area, giving a good introduction to the general story accompanied by detailed descriptions of the best sites to see the geology. An ideal combination. Beautifully presented, with plenty clear diagrams and great images. This is without a doubt the must-have book for anyone interested in geology who is travelling on the west coast of Scotland. Dunedin, Classic Geology in Europe 9, ISBN 978-1-78046-040-6.

Land of Mountain and Flood, Alan McKirdy, John Gordon and Roger Crofts, 2007. A big book in all senses! A grand overview of the geology and landscapes of Scotland, with chapters on why geology is important in all our lives, Scotland’s journey and the future on different time scales. Places to visit, and plenty, big, beautiful photos to inspire you. Birlinn, ISBN 1 84158 357 X.

Volcanoes and the Making of Scotland (2nd edition), Brian Upton, 2015. A detailed account of the many different volcanic episodes that have been crucial in forming Scotland’s rocks, going back in time from the relatively recent eruptions forming the west coast islands, to eruptions over a billion years ago. Dunedin Academic Press, ISBN 978-1-78046-056-7.

The Earth Science Outdoors project aims to bring the rocks of Scotland to life and to tell stories of Scotland in the past: of volcanoes and tropical seas, of mountains and vast rivers, of hundreds of millions of years of changing climates and environments, and make links from the rocks to many different aspects of life in Scotland in the past, present and future. The pilot phase of the project ran from 2008-2009, developing resources for 10 sites in Grampian and Fife/Lothians. Funding was provided by Scottish Natural Heritage and a science engagement grant from the Scottish Government.