You are here: Home / Siccar Point

Siccar Point is world-famous as the most important unconformity described by James Hutton (1726-1797) in support of his world-changing ideas on the origin and age of the Earth.

Siccar Point is located about 35 miles east of Edinburgh near the village of Cockburnspath. It is tucked away, not on the tourist trail and not easily accessible (although by road it takes less than an hour to get there from Edinburgh).

“Having taken boat at Dunglass burn, we set out to explore the coast; at Siccar Point, we found a beautiful picture of this junction washed bare by the sea. The sand-stone strata are partly washed away, and partly remaining upon the ends of the vertical schistus; and, in many places, points of the schistus strata are seen standing up through among the sand-stone, the greatest part of which is worn away. Behind this again we have a natural section of those sand-stone strata, containing fragments of the schistus.” James Hutton

Siccar Point remains now much the same as when Hutton visited in 1788. The junction between the older, tilted layers of greywacke sandstone and the younger Old Red Sandstone is clearly visible, allowing us to work out the story of the formation of these rocks; and appreciate, as James Hutton did, the evidence for an ancient Earth where natural processes operate over unimaginable lengths of time to create, alter and eventually destroy rocks.

Hutton’s friend, John Playfair (1748-1819) accompanied Hutton and Sir James Hall on the boat trip to Siccar Point and summed up the importance of this visit by saying “the mind seemed to grow giddy by looking so far into the abyss of time“.

Even without the historical link with James Hutton, Siccar Point would be a place worth visiting. A stunning natural seascape, framed by steep cliffs, and with a wild feel and a sense of natural peace. Standing on the cliff top overlooking Siccar Point you get a feeling of being on a boundary in landscape terms as well as geologically. This landscape reflects the underlying rocks: 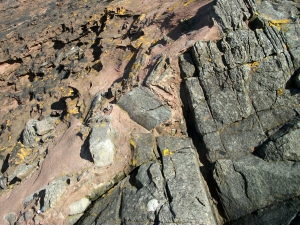 This is a fundamental boundary in another sense, for these rocks are from very different parts of Scotland’s geological story. The greywacke sandstone formed on the floor of the Iapetus Ocean around 430 million years ago, and was later crushed and upended during the closure of the ocean basin at the time of the creation of the great Caledonian mountain chain. The red sandstone came much later, around 380 million years ago, when the Caledonian mountains were eroding and large river systems brought sediment south into the broad, subsiding Midland Valley.

Scottish Borders Council published a very good leaflet in 2011 on Borders Brains walks, exploring the lives and ideas of the Berwickshire geniuses David Hume, James Hutton, Duns Scotus, James Small and Alexander Dow, in the beautiful landscape that gave them birth. You can download it here.

But really – don’t just read about it, you should go and see this wonderful place for yourself… Visiting Siccar Point.

Check out maps and detailed instructions on the Visiting Siccar Point page. Get in touch with Angus if you have any questions, or would like to arrange a guided visit – Contact details.

Check out the Siccar Point leaflet from the Lothian & Borders GeoConservation group, for further information about James Hutton and Siccar Point.